Free domestic shipping on any order $100 and above When it comes to protecting ourselves from the health-damaging effects of manmade electromagnetic frequencies, there is no magic bullet, so a multi-pronged approach is what we need.

Our bodies are complex and intelligent entities with a natural proclivity for self-healing - IF we can only get ourselves out of the way. We just need to give our body a little support from time to time. Okay... more than a little sometimes.

When it comes to EMFs, there are three basic areas to address. My three basic “pillars of protection” are the following:

This post will shine the spotlight on that second pillar by focusing on one of your body’s most powerful antioxidants: glutathione.

What is Glutathione and How Does It Work?

Glutathione (GSH) has been given the nickname “master antioxidant” because of its critical role in combating free radicals. Why is this important for your health?

One of the primary ways radiation wreaks havoc on the body is by generating free radicals – especially hydroxy radicals. These free radicals cause oxidative damage to fragile cellular structures such as DNA, lipids, and mitochondria, resulting in impaired immune responses and chronic inflammation. In time, if left unchecked, this damage can result in serious long-term health consequences.

Antioxidants help the body scavenge free radicals, but glutathione is the real superhero because it has the power to recycle the other antioxidants, such as vitamins C, E and lipoic acid.

Glutathione can also protect and repair DNA - in fact, DNA repair in cells has been shown to depend on glutathione availability. (Chatterjee 2013)

Simply put, your cells use glutathione to limit the damage caused by radiation.

Glutathione is present inside almost every single cell in your body, which means it’s uniquely positioned to neutralize nasty free radicals. It essentially bathes the inside of the cell in protection, thereby tamping down the inflammatory response.

Because of its superpowers, glutathione plays critical roles in protecting you from a multiplicity of terrible diseases such as type 2 diabetes, cancer, heart disease, and dementia.

How Our Glutathione Stores Become Exhausted

Normally, once depleted, glutathione is regenerated in the liver, but our ability to manufacture glutathione declines with age. But age is not the only factor affecting glutathione availability.

Anything that increases free radicals in the body will increase your body’s glutathione requirements, which has the potential for exhausting reserves. Chronic illness, excess sugar and junk food, unmanaged stress, lack of exercise (or even excessive exercise), certain medications, and long-term exposure to environmental toxins, pollution, and heavy metals can deplete glutathione stores in the body. These situations place the body under a two-pronged assault.

First, the stress on your system creates an enormous barrage of free radicals, but there is already diminished glutathione availability - so your body is less able to defend itself. You are caught in a downward spiral of oxidative stress, inflammation, and immune system hits. The result?

Pain, fatigue, and a growing assortment of maladies - not to mention your ever-expanding collection of pill bottles from A to Z.

Of course, chronic EMF exposure is part of the environmental toxicity that contributes to a high toxic load and exhausted glutathione reserves, along with a multitude of other health health concerns.

How to Increase Glutathione Levels Naturally

Glutathione foods can be divided into two categories: foods that contain the glutathione molecule, and foods that stimulate or upregulate your body’s own glutathione production.

Ninety-nine percent of your body’s circulating glutathione comes from what your body is able to manufacture from chemical precursors.

The recipe calls for three amino acids: glutamate, glycine, and cysteine (with cysteine being the limiting factor).

Glutathione is a fussy molecule. Cooking radially reduces glutathione content in foods, as do storage times, farming practices and the like. Only uncooked raw foods are rich in glutathione - practically no glutathione remains in cooked, pasteurized, and processed foods.

By far, asparagus and avocado (raw) have the highest natural glutathione content.

For more ideas, refer to this article on Glutathione Foods.

Glutathione injections and IV infusions are preferred over oral supplementation because they bypass the digestive tract and go directly into your tissues. These raise glutathione levels quickly but provide only a temporary boost.

Is Light Therapy the 21st Century Solution to Boosting Glutathione?

What if there were a way to easily raise your glutathione levels significantly and steadily on an ongoing basis without any need for oral supplements?

A company called LifeWave has developed the technology to do precisely this!

They have created a small patch called Y-Age Glutathione, worn on the skin, that stimulates the body to produce more glutathione.

This is how it works, in a nutshell...

Your body emits heat in the form of infrared light. When placed on the body, the patch traps this infrared light, causing it to reflect specific wavelengths of light into the skin that specifically increase the body's production of glutathione.

The results are impressive.

Studies also noted improvements in the function of multiple organs.

You can read more about LifeWave here. They have developed a variety of different patches, including two for stem cell activation - all with multiple studies to back them up.

I became an affiliate of LifeWave because I was so impressed with their products and technology. I see this as the perfect companion to shungite for EMF protection. Shungite helps protect us from the outside - and the patches help protect us from the inside. In these times of continuous environmental assaults, we can use as many tools in our tool bag as possible.

After researching the impact EMFs can have on our bodies, I decided to buy some shungite rocks and a necklace. Both items came quickly, and I love it all! I placed the rocks strategically around my house and wear the necklace daily.

After receiving the items, I emailed the owner to ask a question about the stones, and she responded within thirty minutes!

I will definitely buy more of her products.

I love my shungite sphere nestled in the rose quartz! It's beautiful just as an ornamental display but the fact it is helping to protect my cells in awesome 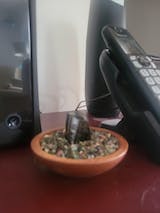 These are so pretty! I like setting them by the tv while I watch. There's no wifi in the house but there's plenty of electricity and even with the Stetzer filters, I can use some more help clearing the space. These are great to move around to wherever I'm doing something. I have two large pieces for the bedroom and computer work station, but these are my "portables".

These are a joy. I love carrying a stone in my pocket. These can also sit by a tv while I watch.