If you want one of the most spectacular elite shungite pendants on the planet - unlike any other - this is it!

These stunners are unparalleled in their power and beauty.

This one is a little smaller than many of the others - but still not small! It features a simple tree of life, wrapped around an elite shungite nugget with an incorporated argentium silver-woven bale.

Elite shungite (aka Type 1) is the rarest and most powerful form of shungite for EMF protection - representing the top 1% of all shungite mined. You don't see much jewelry made from elite shungite due to its rarity AND fragility.

Please note that this listing is for the pendant only. If you want to purchase a sterling silver chain and clasp, I offer those separately - I will make you the full necklace in the length of your choice. Just CLICK HERE!

I love all that I purchased from Val, she is so sweet!
I purchased a large elite nugget, a beautiful elite pendant, a little garden and a bag of elite nuggets!
I put the little nuggets in a heart mica clay bowl and added a few to my cat’s water dish!
All was packaged beautifully!
Very happy and will be purchasing again❣️

Stones are wonderful. Order arrived in a timely manner. Am very pleased.

Natural rock type jewelry was never "me". However I do like the pendant, its lightweight, has interesting textures and color. I didn't like the black cord after all because it limited my wearing options, so I cut it off and put it on various lengths of silver chains. The purchase was made after learning about shungite and emf mitigation properties. 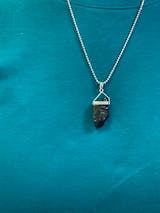 The Shungite Queen was very responsive to my many questions on shungite and this necklace prior to our purchase, and made sure we got the product when we wanted it. I wanted to try a product that could potentially improve my son's EMF symptoms on the days that his daycare takes him to the park, which is right by a cell phone tower. After tracking his behavior for some time, I am certain that the shungite has improved the more immediate physical and behavioral symptoms, but it's understandable that the shungite can only do so much next to a cell phone tower, so his night time symptoms still persist. I appreciate having the shungite necklace to help lessen the damage from EMFs that we can't avoid in public spaces

12
← Back to Shungite Necklaces