FREE shipping to US with any $100 purchase! We are exposed to numerous sources of radiation just by virtue of living on our little blue planet.

Although I am most often talking about the effects of radiation from wireless technologies such as cell phones and cell towers, add to that exposures from X-rays and other medical scans, radiotherapy, industrial exposures, nuclear power plants, radon gas, and cosmic radiation. Our cosmic radiation exposure increases anytime we fly.

Although I am obviously a fan of shungite, this amazing mineraloid is not the end-all, be-all for radiation exposure – there is in fact no magic cure. We need multiple tools in our tool bags.

First and foremost, the best approach is to reduce your exposure as best you can. Avoid unnecessary medical scans and minimize your exposure to wireless devices. Environmental Health Trust has a nice article outlining how to accomplish this.

Since some level of exposure is unavoidable - and chances are you’re not going to give up your Android or Apple watch any time soon - there are supplements you can take that have been scientifically shown to help protect the body from the toxic effects of radiation.

These apply to all types of radiation – ionizing as well as non-ionizing – so they can support you, whether you're talking about the computer on your lap, airline travel, or chemotherapy treatments.

Many foods and supplements prove beneficial, but there are a few standouts. The four I’d like to share in this post are bee propolis, melatonin, NAC - a precursor to glutathione, and detox baths.

Ironically, it turns out that bees, one of Earth's most EMF-vulnerable life forms, provide one of the world's most radioprotective agents: propolis.

Bee propolis has hundreds of scientifically documented health benefits, but protection from radiation is a particularly noteworthy one.

A compound in bee propolis called caffeic acid phenethyl ester (CAPE), which is basically the “glue” bees use to maintain the structural integrity of their hives, has been shown to protect the heart, kidneys, and retinas of cell-phone exposed mice.

In one rat study (Koyu et al, 2009), scientists found that bee propolis helped keep the rats’ antioxidant levels strong when they were exposed to a 900 MHz electromagnetic field (EMF), similar to your cell phone. Rats not receiving the propolis experienced a decline in antioxidant levels. Researchers concluded that CAPE may prevent EMF-induced oxidative changes by increasing antioxidant activity.

GreenMedInfo has outlined 15 studies showing propolis’ ability to reduce radiation-induced damage, including that from the gamma radiation typically associated with medical procedures.

In one 2016 study (Ebeid et al, 2016), supplementing breast cancer patients with bee propolis during radiotherapy provided them with significant protection against the DNA damage and tissue injury that comes from this type of treatment.

Propolis is easy to source from any reputable supplement site or nutrition store. There are lots of options – extracts, tinctures, capsules, tablets, powders and more. The recommended dose is typically 500 milligrams once or twice daily.

Melatonin is a hormone made by your pineal gland to help regulate your daily sleep-wake cycles. Factors such as your circadian rhythm (internal clock) and the amount of light you’re exposed to each day influence how much melatonin you produce.

However, there is much more to this special hormone!

Melatonin has strong antioxidant properties and can lower oxidative stress and inflammation, and improve your cardiovascular health, as well as reducing your risk for type 2 diabetes. It has also been found to possess anticancer properties. (Breus 2020)

Melatonin’s antioxidant benefits are what give it its ability to help your cells fight the toxic effects of radiation. It makes sense with respect to EMFs when you consider that EMFs have been proven to impair your body’s natural melatonin production – even weak EMFs. (Thomas, The Sleep Academy)

It is no surprise, then, that a common symptom of electrosensitivity is insomnia. EMFs have been shown to mess with both sleep quality and sleep quantity.

Melatonin supplementation can not only improve your sleep quality, it can help protect you from radiation toxicity.

N-acetyl-cysteine (NAC) is a sulphur-rich compound that is a precursor to glutathione, one of the most powerful antioxidants produced in your body.

Glutathione supplementation directly is challenging due to absorption and stability issues, but taking NAC is effective in helping the body make more of its own glutathione. Higher levels of glutathione may help reduce the negative impact of radiation exposure.

NAC has been shown to be an effective radioprotective agent by reducing oxidative damage (and DNA damage), and by releasing cytokines known to protect the bone narrow against radiation injury. NAC protects your liver (Ozgur et al, 2010) and bone marrow (Demirel et al, 2009; Selig et al 1993)

In a 2009 mouse study, giving the rodents a mixture of vitamins C, E, and NAC, significantly increased their survival rates when exposed to a potentially lethal dose of X-rays. Interestingly, the benefit was the same whether the supplement was given before or after the exposure (Wambi et al, 2009)

Finally, one other thing you can do to help your body fight the ravages of wireless assault is to take a detox bath. This is also beneficial after air travel, or if you must have an X-ray, CT scan, mammogram or other diagnostic scan that involves radiation.

Did you know that a CT scan exposes you to about 50 to 250 times the radiation of the average chest x-ray? (Harvard Women's Health Watch, 2020) Good to avoid, if possible.

The most tried and true detox bath for radiation detox comes from the legendary health pioneer Dr. Hazel Parcells, as radiation was one of her deepest concerns. She recommended salt and soda baths. Here is her recommended method:

Dissolve one pound of sea salt or rock salt and one pound of baking soda in a tub of hot water – as hot as you can stand. Stay in the bath for 30 to 45 minutes as the water cools. Refrain from showering for at least four hours – or do the bath right before bed and shower the next day.

That’s it! But it IS a lot of salt and soda.

Numerous other variations have come about of late, and this article at Natural Health Remedies lists some of them. My own functional medicine doc recommends a combination of baking soda, hydrogen peroxide and magnesium oil. I sometimes use that combo - or I substitute Epsom salt for the magnesium oil, then add a few drops of essential oils to help me relax. Ahhhh....

So that’s it for this one. There are certainly many more radioprotective foods and supplements - too many to cover in one post. Maybe I’ll tackle a few more in the future. In the meantime, keep fighting the good fight!

So pretty. I love them and already getting positive comments. They are a good length for me.

This is relatively proportional replica of the Great Cheops pyramid. This is a must have rarity. It is a quality piece that is elegantly hand crafted. I recommend this item without reservation. The "Wow" comments are all well deserved.

Such a well crafted bracelet. I purchased this as a gift for my sister and she loves it. Val’s customer service is too notch and she puts so much love and care into everything she makes. Shipping is fast too. Thank you Val!

I'm very happy with this piece. I've actually purchased several pieces from the Shanghai Queen herself and not only are the pieces she creates lovely, is she herself is a lovely human as well. I will definitely be purchasing more pieces in the future. 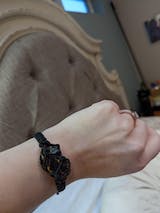 I am truly excited about the water stones. I feel this will help me on my health journey.